**THIS HAS SPOILERS OF THE MOVIE ARRIVAL**

If you haven’t seen the movie, don’t read this post–yet! 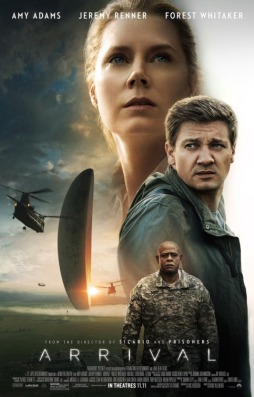 We were given all the facts. Aliens come to our world. A linguist works on figuring out their language. As she does so she has flashes of scenes of her and her daughter. The trick that the screen writers played on us was showing us the first scene in the movie out of context, and then slipping to the beginning of the movie. We assume that the story is linear (since most of the time that assumption would be correct) and therefore that the prologue happened before the start of the movie. It is only at the end of the movie that we realize that it was the end, the future that we were show, and that the scenes the heroine envisions are not flashbacks, but flash-forwards.

The most wonderful thing about the movie, and about any good book, is that it didn’t end when the screen went to the credits. The movie continued in our minds—indeed, we couldn’t stop thinking about it, deconstructing it, discussing it. That is a great story!

I’ve recently been working through Lisa Cron’s book, Story Genius. She posits that great story comes from the journey, the change and the growth of the protagonist. But Arrival has taught me that a great story is not the one that the author writes on the page, but in the dots that the reader puts together themselves.

Give the reader enough information—in the form of scenes—and allow them to connect it into a cohesive story. What the reader will put together will be so much more meaningful, more powerful, than anything the author could have written.

Yes, as I’ve written before, writers can change the minds of their readers by emotionally involving the reader in a story, but it is so much more powerful and life-altering is it when the reader comes up with the meaning themselves. It’s doing, not watching that allows us to learn. It’s figuring out the meaning, not someone telling it to us that gives it power and significance. It’s the negative space, what is not told or shown, where the strength in good story telling lies.