I’m in the process of reviewing my editors comments on a new short story/novella. It’s the bonus story in my Merry Men Box Set #2 (which will be available December 15th). 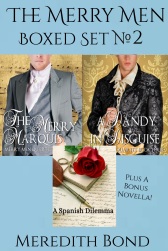 In Box Set #1, I included the story of how the parents of the hero in one of the books in the box set met, so I thought it would be fun to do that again. The problem is that to write this story I had to learn all about the treaty negotiations between France and Spain at the beginning of the Napoleonic War. That would have been fine. I love history. But I didn’t just have to learn what happened, I had to figure out how a negotiator would have actually conducted his negotiations. I had to figure out all of the nuances in this delicate task and the underlying political consequences of each move.

I had to learn all about the politics at the time and how treaties are actually negotiated! Ugh! I am not a politician. I don’t like politics all that much. It’s really slippery stuff. But in order to write a convincing, authentic story I had to have an idea of how these things worked and how people who engage in politics (and treaty negotiations) think. Once I did that, I had to make sure that the story wasn’t actually about the politics (because, lets face it, you don’t want to be reading a dry recounting of a pretty minor treaty negotiation, you want to be reading a romance novel!), but about the people.

It made me start thinking… as writers, we actually have to know a lot about things work. If we’re going to have someone murdered in a book, we have to know exactly how it happens, how the blood spurts, how it feels to hold a gun, or sword, or whatever the murder weapon is in your hand and how to wield it. Just how hard is it to slice off someone’s head? Well… actually, it’s really hard. There’s a lot of bone and tissue and tendon in there that you have to slice through. Why do I know this? Because I’ve written about it, so I had to learn about it.

I’m beginning to think that if people knew how much research goes into every novel, they’d have a lot more respect for writers. We become experts in whatever it is we’re writing about. We need to be in order to write convincing stories.

How is it then that writers are dismissed and thought of in the lowest possible terms? We know how to kill you. Er… I mean, we know a lot of stuff! 🙂 History, medicine, politics, law, you name it, if a novel has been written about it, that author had to know that subject pretty darn well. No wonder the authors I know are so intelligent–intelligent enough not to get upset when our work is dismissed as frivolous.

So, what is your specialty? What could you write about? Or what have you learned by reading a great book?