It’s what we think about this and every Halloween. But the most fun, for me, of the night is not getting scared out of my wits (I don’t actually enjoy that), but to think about that fine line line between our ordinary world and the Other–the world of Spirits.
What everyone agrees upon, however—and not just in our Western culture, but in many from the East as well—is that this is the time of year when the fine line that separates the two worlds is at its thinnest. This is when those who exist on one side of the line have the chance to cross over to the other.
In the Gaelic tradition (from which our traditional Halloween comes from) on All Hallow’s Eve those which live in the spirit world can pass over into our own. People would either put out all sorts of things to scare these spirits back into their own world—be it scary-looking carved vegetables (pumpkins) or people dressed as scary creatures themselves. Some people spend their time praying to positive spirits to protect them from the nasties. Either way, the night leaves the doors open for negatives to come find us. I like to ward them off with candy.
But even the Hindu tradition knows that it is at this time of year that the veil is thin. This is where the celebration of Diwali

comes in. People put out lights to protect themselves and their homes from negative elements which, at this time of year, can invade our world. In the Indian-Bengali tradition people put a candle at every entrance to their home to keep the negative spirits out. In other parts of India, people light bonfires and set off fireworks to scare away the negative elements.
Other traditions around the world include leaving food out for the spirits who come to visit on this night – to encourage them to come and leave their good will and wisdom with us. Others light candles in memory of those who reside on the other side of the veil or, in China and Japan, to light the path of the spirits so that they may find their way home again.
Whatever your Halloween tradition is—be it welcoming or warding off of spirits—I hope it’s a good one!

Just in Time for a Highland Christmas 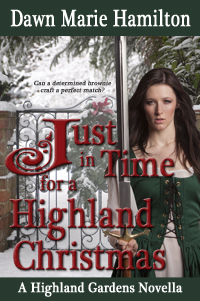 Can a determined brownie craft a perfect match in time for Christmas?

When the Chief of Clan MacLachlan travels to the stronghold of his feuding neighbors to fetch his betrothed, she is gone. A year later, she is still missing. Making life more vexing, a band of reivers are stealing clan cattle, leaving behind destruction. Archibald MacLachlan determines to capture them and administer harsh punishment.

Though once in love with the man, Isobell Lamont refuses to wed her clan’s enemy. After running away, she joins the band of reivers set on revenge.

Can Archibald forgive the raven-haired beauty? Will a journey through time bring them together for a Highland Christmas? 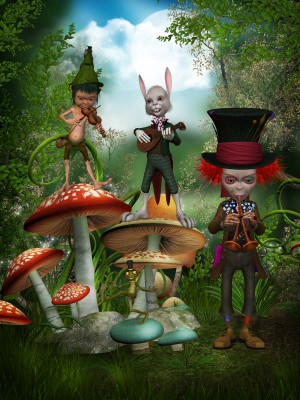 October is such a fabulous month. The weather is great. And we get to decorate for Halloween. Last year, we played scary music and I dressed as a witch for when the kids came to visit. This year, I’m feeling a wee fanciful. 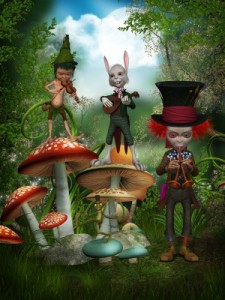 Does this picture inspire all kinds of fanciful thoughts? I can visualize these fae creatures serenading their queen as she dances about the faerie hill (Sithichean Sluaigh in Scottish Gaelic) in her silvery raiment waiting for the king. Oonagh, Queen of the Fae, plays a vital, secondary role in the Highland Gardens Scottish time travel series. She has challenged a banished faerie princess to make three nearly impossible love matches that transcend time. Just Beyond the Garden Gate and Just Once in a Verra Blue Moon are the first two books in the series.

Just in Time for a Highland Christmas (A Highland Gardens Novella) will release in late November. The cover will be revealed for the first time on Friday, October 17th during the Book Addicts’s Facebook party. Join the party. The reveal will happen sometime between 3:00 – 4:00 CST. The party runs Friday, Saturday, and Sunday. Lots of participating authors with a ton of giveaways. I’ll post the cover here on Saturday, October 18th for Supernatural Superlatives followers. 🙂 Can’t wait to share it with you.

Scottish Highland Games are near and dear to me, and I have used my visits and volunteer ‘work’ as the catalyst to creat my various books based at the games. At the fictional New England Highland games, my characters work the vendor tents, cook the Scottish foods such as meat pies, bridies, or shortbread, serve the beer and whisky, and try their prowess at various athletic events.

Watching the pipe bands strut their stuff is enjoyable and I would like to share a video I took of the massed bands marching together to the tune of Scotland the Brave. These bands are from all over the USA, Canada, and Scotland and never practiced together before showing off their marching skills.

…and here are a few photos from the 2014 New Hampshire Highland Games & Festival: 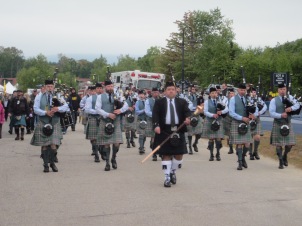 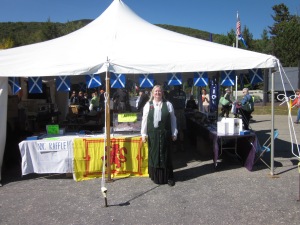